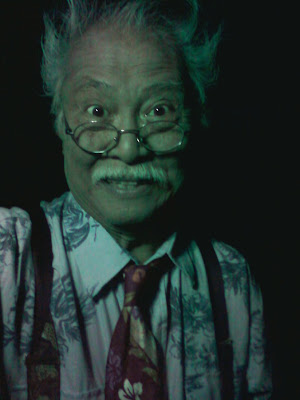 Bert Matias as the 'BOXMAN'

Bert is happy to be doing his second production with The Mammals. His first, Bob Fisher's hit show "Seven Snakes" in the Fall of 2010 was a total fun trip for him artistically. It was such a great project to do, not to mention all the positive reviews and notices it generated in the critics' corner and the chance to meet a new set of theatre friends making it more worthwhile. He thinks "Seven Snakes" also brought him luck when his next theatre gig happened to be last January in New York, when in the midst of the great Blizzard of 2011, he was hired in the off-Broadway world premiere of Kyoung H. Park's "disOriented." He played Ouiharaboji, a gambling Korean father and grandfather living in Seoul with a crippled wife awaiting the visit of their daughter and grandson from Yonkers, NY. While working in the Big Apple, Bert's luck continued, receiving a call from Chicago's Goodman Theatre offering him the role of Fulgencio (Firs, in The Cherry Orchard) in "El Nogalar," the Teatro Vista production of Tanya Saracho's premiere showing of the Hispanicized 'Cherry Orchard-inspired play." It was, again, a first for Bert, working in his initial Goodman acting job last March-April. Before he played the role of Chupa Fuerte in "Seven Snakes" with The Mammals, Bert lived with his wife in Seattle where his theatre credits included Tiresias in "Revenge and Sorrow in Thebes" with Stony Soup Theatre, Dr. Waxling in Balagan Theatre's "Search and Destroy" and as a member of the ensemble in Book-It Repertory Theatre's world premiere of "Snow Falling On Cedars." Look for Bert every Christmas season when "Fred Claus" gets its annual TV airtime; he plays the Eskimo musher who gave the Vince Vaughn character a ride on his dog sled to the North Pole. He wants to thank Bob Fisher for this valuable continued opportunity with The Mammals players.


All performances are at 10pm – BYOB