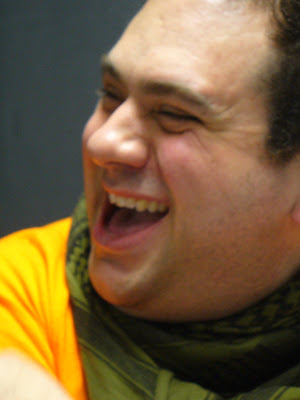 Gabe Garza, playing "Rudy the Rhino", has been acting in Chicago for a decade. THE MEATLOCKER is his second Mammals production. The Mammals just can't get enough of him. We believe he is the perfect amalgamation of Zero Mostel and Marlon Brando. Last year he starred as "Dumdum" in DEVILS DON'T FORGET. He is thrilled to be working with such a wonderful cast and crew. Come check him out in THE MEATLOCKER

The Mammals explore performance works embracing themes of history, mythology, and destiny through the genres of science fiction, horror, and phantasmagoria.
Posted by devilvet at 10:07 AM