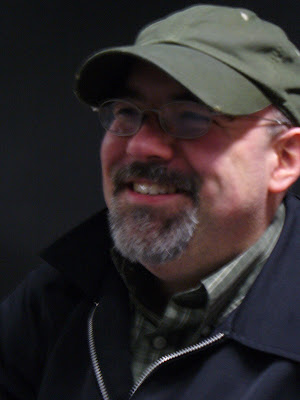 Gene Van Dyke is playing both "Lumberjack Larou" and "Danny's Mother" in THE MEATLOCKER grew up in an unknown small town in the unterlands and swamps of the Ohio Valley, officially a “spit’s throw” from Pittsburgh, PA. He is very pleased that the Mammals have voted to allow him to participate in his first production at the Zoo. If Gene could speak out of turn this very instant, he would mention Bob’s inspirational tolerance. He also appreciates the cab rides home his wife Nicolle surprises him with on occasion.

Come See Gene in our show!

The Mammals explore performance works embracing themes of history, mythology, and destiny through the genres of science fiction, horror, and phantasmagoria.
Posted by devilvet at 5:15 AM